Bill Moyers calls it a remarkable example of “the simple yet transformative power of music… to touch something in each of us.” As we sit down to watch the DVD Songs from Around the World by the nonprofit group Playing For Change, our friends, Noel & Steve, can’t contain how amazing and emotional this film is to them – goosebumps, tears… check it out…

Here’s one of the most viewed songs from the film – Stand By Me.

Here is the story in their words:

Several years ago, a small group of filmmakers set out with a dream to make a documentary film about street musicians from around the world. Using innovative mobile audio/video techniques, Playing for Change (PFC) records musicians outdoors in cities and townships worldwide. They’ve traveled from post-Katrina New Orleans to post-apartheid South Africa, from the remote beauty of the Himalayas to the religious diversity of Jerusalem. Their talents are captured in myriad environments: under the sun and beneath the streetlights… in public parks, plazas and promenades… in doorways, on cobblestone streets, amid hilly pueblos. Their performances are subsequently combined in allowing them to collaborate – albeit separated by hundreds, or even thousands, of miles.

While traveling to around the world to film and record these musicians, the crew became intimately involved with the music and people of each community they visited. Many of these people lived very modestly in communities with limited resources; nevertheless, they were full of generosity, warmth, and above all they were connected to each other by a common thread: music.

By providing a safe place to learn and flourish, PFCF schools offer a positive alternative to the struggles that many children face daily. The mentorship and guidance the students receive from musicians and teachers provides a strong foundation for them to grow and thrive. In an effort to preserve history and cultural traditions, each school’s curriculum is focused on regional music and instruments.  The global role of music is also explored via interaction with other schools, students, teachers and musical cultures. In addition to building music schools, we provide resources and opportunities to communities in need, thereby empowering these communities with the ability to establish thriving and sustainable economies.

These are not our schools; each school belongs to the people in the community. The community is invested in the school and its success.  The people create the energy that the schools – and the community – need to succeed.

The Playing For Change Foundation is committed to creating positive change through music education. You can contribute directly to the foundation or support the cause by purchasing the DVD/CD: Songs from Around the World. 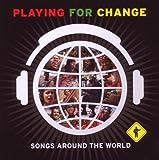 
Certainly, travel is more than the seeing of sights; it is a change that goes on, deep and permanent, in the ideas of living.